At the height of the Covid-19 pandemic in early April 2020 Captain Tom, a ninety-nine-year-old Second World War Veteran, came up with a big idea: he'd walk laps of his garden to raise money for the NHS. Despite using a walking frame as well as having undergone recent treatment for cancer and a broken hip, he was determined to hit Â£1000 by his 100th birthday on 30th April.

By the time his 100th birthday telegram from the Queen arrived, he'd raised over thirty million pounds. His efforts were celebrated around the world. The Duke of Cambridge, hailed him as a "one-man fundraising machine," whilst Prince Harry described him as "utterly amazing".

We were honoured and privileged to be Captain Sir Tomâs Literary, TV and Film agency and enable him to bring his story to life in words, along with engaging and inspirational TV interviews, documentaries and a fascinating film of his life which will be on the big screen â date to be announced.

Captain Tomâs official autobiography Tomorrow Will Be A Good Day was published in September 2020 and within a week, Captain Tom broke the record for being the oldest author to be a Number 1 Sunday Times Bestseller. It tells of his long and dramatic life. How his spirit was forged on the battlefields of Burma where victory was snatched from the jaws of defeat. How he fearlessly raced motorbikes competitively. How, in his nineties, he took off for the Himalayas and Everest, simply because heâd never been. And, finally, how this old soldier came to do his bit for the NHS, becoming the nationâs hero in our darkest hour. In October 2020 his childrenâs book, One Hundred Steps, was published and tells a story about adventure, helping people and never giving up. Fully illustrated for younger readers, and following the key moments from Captain Tomâs incredible life, the book shows what is possible when we come together and never, ever give up.

Both his books support his charity 'The Captain Tom Foundation' which will continue to do his good work as well as inspiring a new generation of Captain Toms, and we are proud to have helped enabled him to create a literary legacy that we know he was extremely proud of.

Thank you Captain Tom for your inspiration, smile, wit and wisdom wrapped up in the kindest of hearts. Our love and thoughts are with the family at this sad time as we honour Captain Tomâs legacy by holding hope in our hearts that "Tomorrow Will Be A Good Day".

âOne Hundred Reasons to Hopeâ from the inspiring late Captain Sir Tom is out now!

We are proud to announce the publication of âOne Hundred Reasons To Hopeâ from the inspiring late Captain Sir Tom Moore. This book celebrates stories of triumph, perseverance and positivity from unsung heroes and some well-known individuals. Illustrated by the wonderful Adam Larkan. Released on 16th September.

Sign up to the #CaptainTom100 challenge from the 30th April! It does not matter if you do 100 steps or 100 miles, tell 100 jokes or bake 100 cakes - just pick a charity and make a difference! All you need to do is dream up a challenge based around the number 100, and do it between Friday 30 April and Monday 3 May. For more information visit: https://captaintom100.com

The latest book from the wonderful late Captain Sir Tom Moore âCaptain Tom's Life Lessonsâ is published today - it is available at all retailers.

âTomorrow Will Be A Good Dayâ has been nominated for a British Book Award - a wonderful honour for this story of an amazing person.

Captain Sir Tom Moore (30 April 1920 â 2 February 2021) led a fascinating, full and honourable life. He captured the hearts of the Nation with his determination to make a difference to others at the grand age of 100 years old. Since Tom first graced our TV screens in 2020, he entered our hearts and for many people felt part of the family. Captain Tom has been a beacon of hope in the most uncertain of times and has helped so many people in the process. He wanted to help the NHS cope with COVID-19 and in the end the NHS supported Tom during his final journey. Our love and thoughts are with the family at this sad time.

An image of Captain Sir Tom in lights was featured in London's spectacular New Years' Eve light display, we think this tweet from the Mayor of London (@MayorofLondon) says it all: "A true national hero. When we all needed a lift during the first lockdown @CaptainTomMoore was there to show us that anything is possible. Thank you, Captain Sir Tom. #LondonTogether"

Captain Sir Tom was featured as one of The Week's People of the Year!

Captain Sir Tom was in The Sunday Telegraph as part of their featured article: "40 famous faces on their optimism for 2021"

Captain Sir Tom featured in The Observer & The Guardian as one of their Faces of the Year paying tribute to people who helped us get through 2020!

Otterbeck Distillery has partnered with Captain Sir Tom Moore to launch a new gin that will support The Captain Tom Foundation. Nicola Lampkin, co-founder of Otterbeck Distillery, said: âIt is an amazing privilege to be working with Captain Sir Tom and his foundation which supports some incredible charities; weâre delighted to be able to do our bit to help support such worthwhile causes."

Captain Sir Tom Moore was the winner of the GQ's Men of the Year "Inspiration Award", he also featured as their oldest ever cover star! GQ said: "The thing that shines through more than anything in 100-year-old Second World War veteran Captain Sir Tom Moore is his sunny disposition, which was needed this year more than ever. After raising Â£32m for the NHS by walking laps in his garden, he has become a vital figure and a beacon of hope during the pandemic."

Congratulation to Captain Sir Tom Moore who now has two best selling books. His autobiography 'Tomorrow will be a Good Day' and his latest release and children's book 'One hundred Steps' which entered the Amazon chart at number 5 in the overall Top 100.

After publishing on the 17th September Captain Tom is now an Amazon Best Selling Author with both his autobiography 'Tomorrow will be a Good Day' and his kids book 'One Hundred Steps'. Both books hit top ten on publication day on the Amazon Top 100 chart.

Captain Sir Tom Moore appeared on ITVâs Piers Morganâs Life Stories. He chatted with Piers about his life in the military, his new found fame and raising millions for the NHS amid the pandemic. 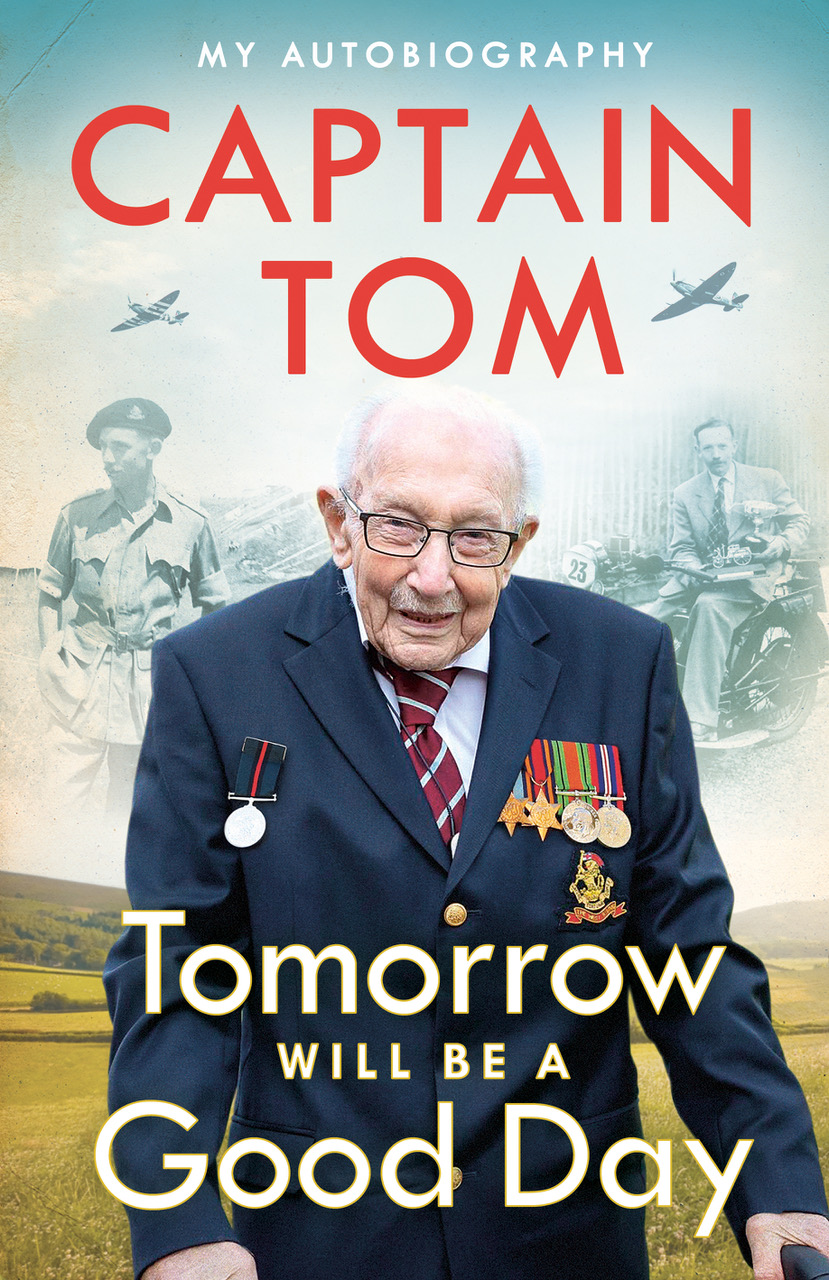 Captain Tom is now officially the oldest author to have a Number 1 book within the UK with already over 20,000 copies sold. What an achievement!

A young Captain Sir Tom Moore featured on the cover of a special VJ Day Commemorative issue of the Radio Times which included an interview with him about his memories of the war - he was quoted on the cover as saying: "I wasn't very scared" - spoken like a true hero!

Captain Sir Tom Moore, who raised more than Â£32 million for the NHS in April, has shared his memories of wartime in a special ITV documentary - Captain Tom's War. The ITV special 'The Life and Times of Captain Sir Tom' produced by North One reached an audience of 3 million.

Captain Sir Tom Moore received a knighthood from Queen Elizabeth II at Windsor Castle on Friday 17th July. Prime Minister Boris Johnson, who made the nomination for the knighthood, wrote on Twitter: "Arise Sir Tom! So richly deserved - you have inspired the whole nation with your fantastic fundraising efforts."

Captain Sir Tom Moore entered into our lives in an unprecedented and uncertain time of which we have never seen before. Over 30 million pounds later, Captain Tom is a household name and a national treasure.

Alongside Penguin Random House, Captain Tom is publishing a biography (September 2020) and children's book (October 2020) to add to his incredible fundraising achievements for the NHS.

We are proud to announce the publication of âOne Hundred Reasons To Hopeâ from the inspiring late Captain Sir Tom. This book celebrates stories of triumph, perseverance and positivity from unsung heroes and some well-known individuals. Illustrated by the wonderful Adam Larkan. Released on 16th September.